For many of us, it would be hard to imagine a time without the New York State Thruway. It is a staple, not just in New York, but in all of America, of our way of life. It molded and shaped our towns and our lives. As travel became high speed, the towns next to the thruway thrived. Those with even just a few miles separating them, withered and dead.

Silver Creek, New York is one of those towns. With only two miles between it and the exit, the town lost the ability to support its many businesses.

According to the New York Thruway Authority’s website, the road today runs from New York City, through Albany, Rochester and Buffalo, finally ends after more than 570 miles at Ripley, New York on the Pennsylvania border.

The roadway was named after the governor of New York at the time, Thomas E. Dewey, and is one of the oldest components of the National Interstate Highway System and one of the longest toll roads in the nation. It has 809 bridges, 134 interchanges, 11 toll barriers, and 27 travel plazas.

The road was born in 1942 with a bill that was adopted by State Legislature and signed by the governor. That added the general route of a superhighway to the State’s official highway map, thereby clearing the way for its planning, design and construction. 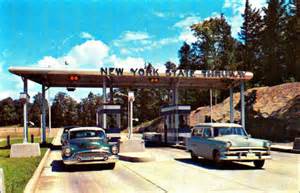 In 1944 the legislature authorized the Department of Public Works to proceed with construction of the thruway, as funds available for highways would permit, based on the recommendations of Dewey.

In February, 1950, a special committee was appointed by the governor to consider a new plan to expedite construction of the thruway on a self-liquidating basis. Thus the network we know today was started. The road could exist outside of the tax rolls, while speeding up the rate in which it was created by charging tolls.

According to the March 7, 1953 edition of the Saturday Evening Post, the roadway would require as much excavation as 6 Erie Canals. It will use enough drainage pipe to go from Washington to Baltimore and back, enough steel to build five Empire State Buildings and enough gravel and sand to fill 100,000,000 dump trucks. A driver would expect to encounter at least one bridge per mile.

This lowered the traffic on Routes 5 and 20. Both roads run right into the heart of Silver Creek’s business district.

“It was a booming community,” Silver Creek Mayor Nick Piccolo said. “When the thruway came through that was the beginning of the end of the village to maintain its own stores. With the thruway came the malls and shopping marts. (People) could go to those malls and do (their) one stop shopping. Patronizing of the local stores started to desist.” 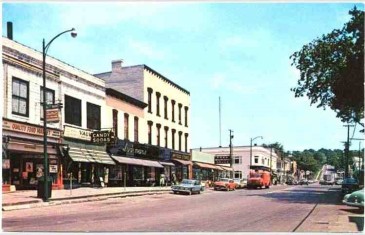 Piccolo said that before the construction of the thruway the village had 6 “mom and pop stores” along with two pharmacies. The Ludeman’s Clothing store was located on the north side of Central Ave between Main and Howard, along with five or six other businesses.

Only the Rite Aid Pharmacy takes up this space today.

Silver Creek also had five car dealers, also according to Piccolo. Today, only a used car dealer remains, Dolce Automotive. A quick Bing Maps search may answer why none of those dealers exist today. After looking up the dealers West Herr and Basil, the maps show that most of the dealers are all grouped for easy access from the thruway. 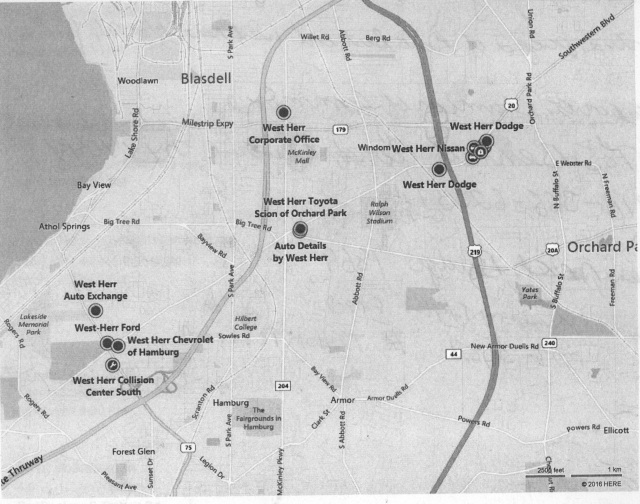 While most dealerships are in the Hamburg area, even the ones that are not in Hamburg are next to the thruway. Basil has two dealerships in Chautauqua County. One is in Westfield and the other Fredonia. Both towns have an exit from the thruway.

In a telephone interview, longtime resident Mike Brown took me on a tour of Silver Creek, back in the day. Starting at Wright’s Grocery that used to be on the top of Buffalo Street. The foot bridge that took people from Main Street to half way up the hill on Buffalo Street was closed in the 1980s and was completely destroyed by the 2009 summer flood. But Brown took me down that bridge and on a journey through the village, naming all the business that used to be there and where they were.

Where mostly an empty building sits now, Brown could rattle off the names of the people who made their lives there.

When asked if he thought the thruway had a hand in making the town what it was today, he said, “Big time.”

“All the businesses along the thruway lost business. It effected every town but Silver Creek especially. You had to pass through Silver Creek to get to Pennsylvania (from Buffalo). It went from a metropolis to a ghost town in 10 to 15 years. People had to rethink on how to make a living.”

“It had enough traffic for the time because there was less cars,” Brown also said. “In 1970 there was 15 gas stations at least, 10 for sure (within the limits).”

In modern day Silver Creek there are no gas stations within the village limits.

Silver Creek is just one example of how the construction of the superhighway effected small towns. Silver Creek may have felt aftershocks of its construction but some places felt the pinch even before completion. Also according to the Saturday Evening Post, entire towns had to be displaced for the road to pass through, especially for the parameters that the designers set forth. Motorist must be able to see 1000 feet in front of them, and no curve can have a radius of less than 2800 feet.

As Silver Creek lost taxable income slowly, the old Erie Canal town of Fultonville lost 1/7 of taxable income as the thruway ran right through the middle of the village. Several homes and business had to knocked down to let the road pass between the canal and steep hills.

Several dairy farmers had their fields cut in half and were not able to move cattle from one end of their land to another, due to the limited access nature of the road. Thruway engineers thought it would take up to ten years for the property to become recognizable units again.

The New York State Thruway is a good example of how modern advancement changes lives. Not only does it become part of our culture it helps to shape it. Small town life was drastically changed by the thruway. I myself, like many of small town residents, no longer stayed within town to work. Small businesses that made small town life are gone. To see some of the changes drive through any small town in the area. The changes are apparent.