It was a dark and stormy night…

Peefffttt! Wha hahaha! Oh that’s rich. Did you fall for that one?

Like I would start anything with that. “It was a dark and stormy night.” Made you look.

Now if you will excuse me, I have a humongous earache in my eye.

I will be at the Buffalo Comic Con at The Marriott Inn, 1340 Millersport Hwy., Amherst on Sunday from 10 to 5. Come see me there, buy a book and I will sign it for free! Wow! What a deal!

Sometimes it is nice to just do something quick and easy. With all the fun I have been having with my damn model cars, it can be nice. This 57 Chevy was just that. I did it stock, but in a nice color. No muss, no fuss, just satisfying results.

The bottoms were just painted black after assembly. The biggest challenge was the two tone. It took a lot of precision taping. The inside was painted white then the red hand painted in. The reds don’t match up totally, but I have only so much money to throw at these things and most people won’t notice. 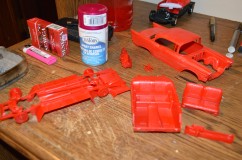 The paint is called gloss custom grape, and is more clear than anything. The original red the body was molded in still came out after several coats but it worked out in the end, giving it a nice color.

I thought this one was nice enough for a case. The little things that people never tell you make a difference in your life, even if it is a “duh” moment when you finally figure them out for yourself. Put the car on the base, then mark where the axles are, as that is what you normally attach them with. Twisties work well, but they never give them to you in the box anymore. They used to, cheap bastards.

If you use a zip tie, yeah, use the biggest one you can find. Not. Remember that cheap drill I told you to get? If you didn’t get it, run to the Home Depot and get one, I’ll wait.

Back? Okay. Drill two holes, one big enough for the head of the zip tie to go through, one in front and one behind the axle, NOT parallel with the axle. It causes the car to sit crooked on the base. Bend the end of the tie a bit to help get it out from the body, then snake it into the holes.

Don’t pull down with all your gorilla man strength. Once you hear the snap, congratulations you just broke it.

Resist the temptation to glue the case shut. Just like real cars, over time parts will fall off. Then you have little choice but to bust the case to fix it.

As a side note for those of you who paid attention, yes I did go to the comic con in Cortland. It was a disaster and I don’t wanna talk about it. Hopefully the one this Sunday in Buffalo will be better.

Well, just to prove that I can do more than write, had to pull little Miss Morgan out of the ditch today. Like I have been a fan of saying, everyone needs their own Scottie. And a Baby Blue.

Scott Downey
Create a free website or blog at WordPress.com.