I would read the post under this one first, things will make a bit more sense. 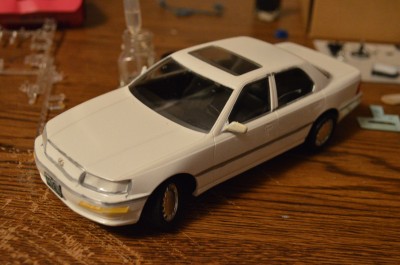 Did I spell Lexus right? Ahh who cares. Lexus. Eww. So why did I put a Lexus together. So I could smash it up. Remember that I want to make dioramas? The… you know, that thing… is one part of a three model diorama. The rusted truck and trailer are the other parts.

Remember also what I said a heat gun could do to a model car? Here you go.

The bench helped. I like the headlight hanging out. Used a bit of string. I am waiting for a driver for the truck to come in the mail then I will assemble that.

The car…see how I got around saying “Lexus?” Aw damn.

It was pre-owned. Parts were AWOL along with the destructions. I had to fabricate the front tires on and a lot of guess work went into getting the rear tires on. I plan to stop at the second hand store and pick up some necklaces, that I will spray with rust color to “chain” the car to the trailer.

More to come later. It is Auto Arts second year anniversary! Here is to another year of hot rides, chicken wings and debauchery.