Before I say anything myself, I thought I would give you a idea of what this is.

It may look like the illegitimate love child of a corrugated shipping container and a dumpster, but the Volkswagen Thing was in fact the resurrection of a German military vehicle known as the Kübelwagen. More than a specific model, the Kübelwagen was a concept; consider how Americans tend to call any military runabout a Jeep, and you’ve got the idea. And with Kübel meaning “bucket” and Wagen meaning “car,” what could have been a better name for such a steel tub than, of course, the Thing?  (dastank.com). 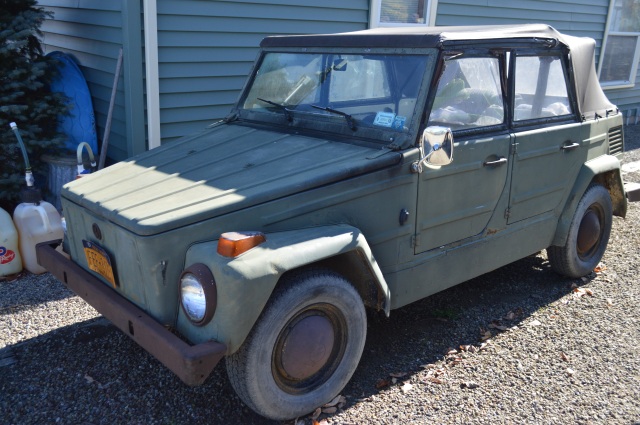 Cindy Evert’s step dad bought this…thing…(sorry, couldn’t help it or stop it) new in 1973 ($3150) and except for a short time, has been in the family since. Evert drove it in high school. If her and her friends had somewhere to go they robbed the coffee can/change car for gas money and away they went.

Evert’s six years younger sister drove the car through high school, college and beyond until it got to be too much with no heater in her daily commute. When Evert picked the car up, it was in storage and only had to pay the $60 storage fee to own it.

The Thing was built on the same chassis as the pre-1968 Microbus and was propelled by VW’s air-cooled, 46-hp, 1600-cc flat four. A four-speed manual was the only transmission. Acceleration was ludicrously slow: 0 to 60 mph took more than 23 seconds (dastank.com). 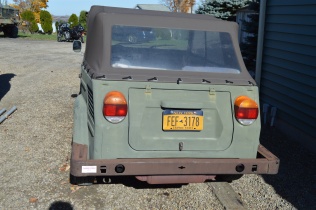 Also according to dastank.com, there were only about 25,000 of these imported because it failed to meet U.S. safety standards so finding one is a bit rare. I don’t think I have ever seen one before.

Evert drove the car this summer, and plans to keep it and drive it as often as she can.