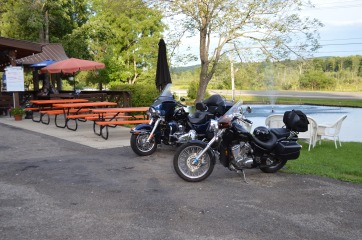 A nice scenic ride down the  out of South Dayton on the 62 to the 394 finds a person in Kennedy, New York. On thing I figured out is that I hate New York’s cheap way of fixing roads. You never notice in a car or in my case, 1500 Chevrolet, how much difference is in the height of a pave over patch (long ways) there is until the tire on a bike finds it and the machine feels like 500 pounds of Jell-O under your butt.

But I made  it to my destination, The Pad. I found this place in an ad In Hard Tales Magazine and this ride was a dream of mine for months.

The inside was nice, but let’s face it, it is still summer and there will be plenty of time later to sit inside. License plates and other signs on the wall made the atmosphere along with “Wake Up, Little Suzie” playing over the  speakers. The next song was “I Just Died in Your Arms Tonight.”

The menu was about like you would expect from a burger and fries and beer kind of joint and they even have their own chicken wing sauce called the “84 Special.”. The bartender Amy told me it was created by the guys down at the local 84 Lumber. It is made with butter, garlic and parmesan cheese and according to Amy, rather popular. I admit that I was not brave today and ordered them BBQ.

The wings came rather quickly. They were tender and really good. Maybe if I was brave and tried the home flavor…but who knows. The staff was really friendly and so was the clientele.

I struck up a conversation with Bob Hazzard of Frewsburg, New York about his 2005 Harley Softtail. What made it stand out was the snakeskin on the seats and the grips. Bob was not 100% sure, but he thought it was a $1200 option.

Living here all my life, sometimes I can forget just how beautiful it can be here in the summer. Winter sucks. No bikes, no hot rods, no color. Just snow and cold. But in summer… 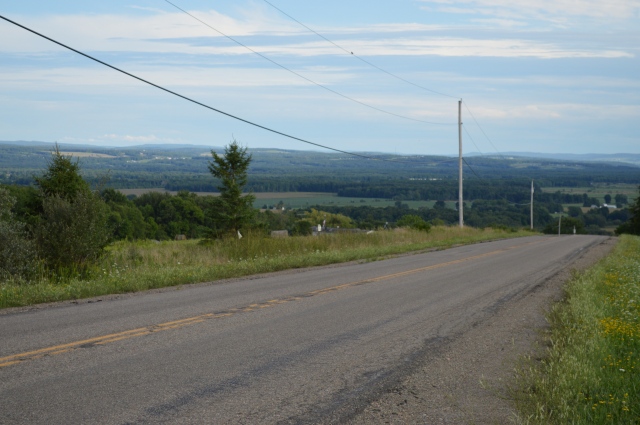 I pulled the bike over and snapped a few in Cherry Creek…ish…on my way to Kennedy to get wings.

The latest stop in the tour was When Pigs Fly BBQ Pit in Barcelona New York, which is right on the waterfront in Westfield. It is always an enjoyable ride down Route 5 for me, and the thought of having wings at the end of the ride makes it all the better. 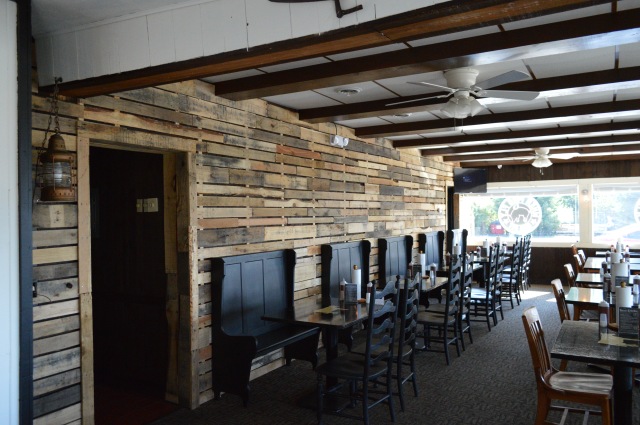 On the site of the former Zebro’s, a lot of work has been done to the inside as a remodel. The fisherman’s motif is now gone and replaced with a down home BBQ like feel. The picnic tables were a definite surprise and add a nice touch to the feel of the place, right down to the wall that looks like it was made out of pallets. 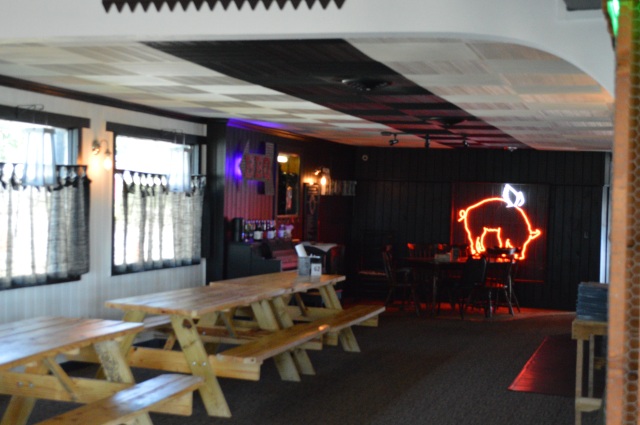 Now on to the best part, the wings! I ordered them honey mustard with a sweetened ice tea. First thing I noticed was the color and texture. They were a deep honey brown and I figured out later that it was the sauce, but at first I thought it was some kind of breading. The sauce was had a chunkiness to it. The wings were not typical. They were still tender, not crunchy at all. And really good…

Come to find out that I thought was baked, was fried but smoked first. It gave them a unique taste and texture that I would love to re-visit.

I guess that is what one would expect from a celebrity chief like Robert Hesse, who according to the June addition of Hard Tales Magazine, was on the Food Network and shows like Hell’s Kitchen. I even saw a bit in the local Pennysaver about him cooking for Rolling Stones headman Mick Jagger.

If you are in the frame of mind that nothing ever comes here, or happens here, Chief Hasse has plans for cooking competitions and plans to take part in local events. 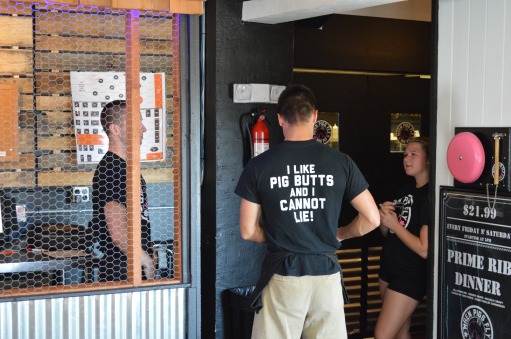 And personally, I think good food is always something we all can get…well…behind.

In Cassadaga New York right on Route 60 is the Whiskey a go…(wopps) Whiskey Hill Saloon and that is the last place visited on the Impromptu Motorcycle Chicken Wing Tour.

From the outside the place don’t look like much but like one of those tasteless fortune cookies it is what is inside that is important. First of all it was cold in there. It did feel real good at first but after being there for around 45 minutes it starts to chill you.

I love the atmosphere of the Whiskey Hill. It was all dark and done in deep wood finishes with hats and skulls and other stuff hung on the walls, with some big comfy wood chairs that you might expect to find on a outdoor patio.

And of course the wings. An order of wings had nine in it which is an really odd number. (I am just full of puns today, and maybe something else). They had many different flavors that one would expect like hot, medium, mild, BBQ and honey mustard but when I read the word “garbage” on the menu I had to ask.

It turns out that it is a mix of popular flavors like BBQ, honey mustard and others, with some Cajun as an option. They even grilled them up for a bit to char them up and it was soooo good. Even the burps later tasted great. They were not greasy at all, which is a bonus. The teenager ordered a BLT and I was impressed with the size of the sandwich.

Even thought I got there at a slow time, the place was great and the waitress was very helpful and really interested in making my visit enjoyable. I will return I think. 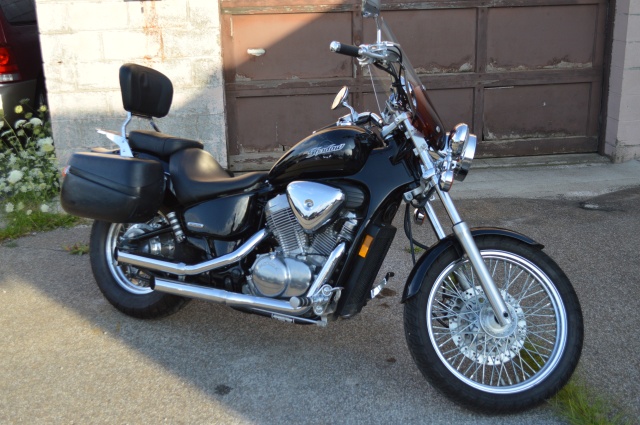 What is a motorcycle chicken wing tour without the motorcycle?

I took the licensing course over the weekend and tomorrow I should be able to get into the DMV and leave a licensed operator. I have not had a chance to ride much even if I had this 425 pound monster ready to go because I do not know a lot of people with a license

I got this 2005 Honda Shadow VLX 600 for a really good price. It only had 9191 on the clock the day I bought it and only has a few more on it now. Its low mileage problem is one I intend to fix. Add ons include plastic saddle bags that lock, a windscreen, sissy bar and Jardine exhaust that has a pleasant tone without being overpoweringly loud.

The only things I have done so far is added a chrome license plate surround, wielded a broken exhaust hanger and zip tied down a few cables that were damaging themselves and the windscreen from rubbing.

According to eaglerider.com, “The Honda Shadow VLX 600 features a powerful, liquid-cooled 583cc V-twin engine which generates 39hp and 36ftlbs of torque. Its home is in the 65mph-and-above range, cruising nicely at 70mph. The seat height is a fairly low 27.2”, accommodating for riders both short and tall. These features make the bike not only great for beginners but also demands to be taken seriously.”

Eagle rider also said that it has a fuel economy of 45 hwy and 35 city with 3.6 gallons in a full tank.

I love riding this thing and can’t wait for the next time. It is responsive, sounds good and I don’t feel like a dork sitting on it like I would with a Rebel 250. 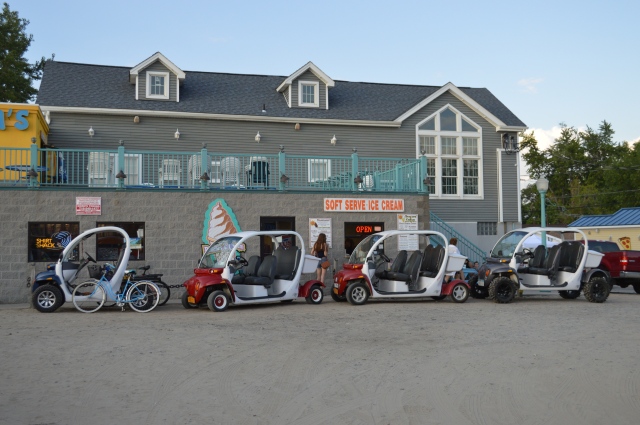 Umm…Kinda like The Villages in Florida isn’t it? Only with less STDs we hope.